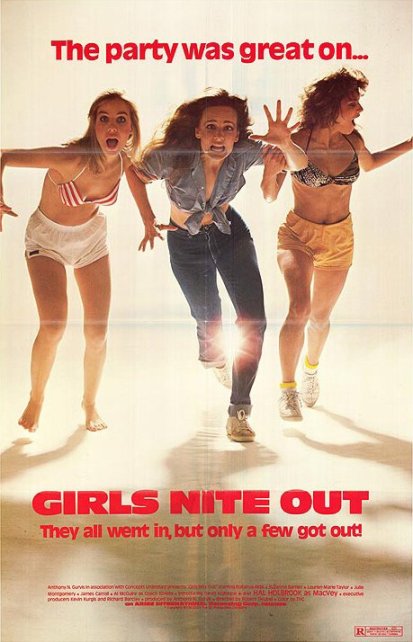 So technically this movie was first released in 1982 under the name The Scaremaker before finding life under a new name 2 years later. That should tell you all you need to know about this one. According to IMDB it had a “test-run theatrical release”, whatever that means, before coming out properly. What I suspect happened is that someone bought something that had already failed, changed the name to something that sounded a little more lurid, slapped that shitty poster together and made some money back.

Remember what I said way back on night about the glut of slasher movies around this time? This was the type of thing I was talking about. Give it some sort of ‘hook’ and off you go. In this case it’s that the killer is dressed up as a high-school mascot so we get a few shots of someone in a comedy bear costume trying to look menacing and it doesn’t work all too well.  It probably takes a particular kind of talent to make something like that threatening and I don’t think___ has it.

There’s not really a lot to say about this one. There’s more characters in here than a Robert Altman movie, all of them completely interchangable. We don’t even get the honour of archetypes and instead get a cast of characters whose only thought seems to be when are they going to fuck next. Amusingly of all they’re meant to be College kids, but I seriously doubt anyone was still in their twenties when they shot this.

They also disappear, despite seeming like main characters. In fact, it’s hard pressed to say who is the main character here. At times it feels as if it’s going for an American Graffiti vibe with the way chracters come and go (They even have a DJ there, giving off Wolfman Jack vibes). We watch one character as he bungles things at a basketball game, gain an insight into his lovelife and spend a good bit of time with him until he vanishes for the rest of the movie, only to show up again towards the end to say that he spent the night with a prostitute.

The only novel thing about it is I suppose the killer, who fashions their own ‘bear claw’ out of a set of knives, but sadly that doesn’t translate into any fun kills. I’m pretty certain we only see two onscreen and they’re both identical in how they play out. It tries, at the end, to throw in a Sleepaway Camp–esque twist to round things off but it’s too ludicrous to work and it doesn’t have the same dreamlike-sleaze that the former movie does.

Veteran actor Hal Halbrook shows up to class things up a bit and I was amused by the fact they clearly got him for one night being that all of his scenes are him alone or talking on the phone. Not only was I right, but the whole production was done across three nights! From a Friday until Sunday.  There’s cheap and there’s larking around with friends for a bit.

Still, the movie does a few things haphazardly right. In a nice spot of gender-reversal it’s the men here who just want to talk about their feelings while the women want to have a good time and screw around. And though the killer targets women (branding them as “sluts” of course) no one seems to be punished for having sex: it’s just regular old gender issues.

I wish I could recommend it. On paper it sounds great (I’m learning not to trust things on paper) and it probably could’ve been a better entry in the genre if anyone gave a shit. But the fact they knocked it out in three nights – and supposedly didn’t even pay one of the lead actresses for her trouble – doesn’t even give enough material for some trashy fun.