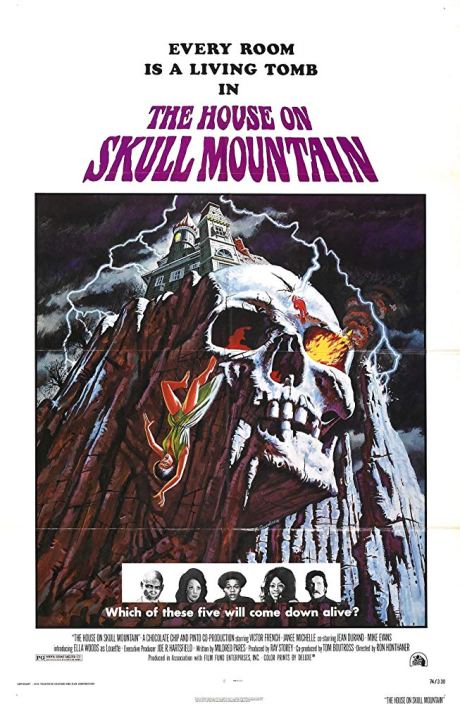 First of all, lets just appreciate that amazing title.

Blacksploitation has often, unfairly, been derided among movie fans in general, let alone horror fans. Movies like Blackula or the awesomely-titled Scream, Blackula Scream are uttered with a snicker for being cheap or starring unknown actors. This isn’t to say that the genre is nothing but hidden-gems, but the whole wheat and chaff thing applies to horror just as much as it applies to anything else. Sadly while you’ll see a ton of YouTube videos talking about Halloween, you’d be hard pressed to find many talking about Ganja and Hess, even though it’s great.

Don’t get me wrong, my own knowledge is pretty limited as well, though it just gives me more to discover. However, good or bad, black horror cinema started long before Get Out was released. There’s direct lineage too between this movie and that one, dealing as though both do with issues inherent in being black.  What they end up saying though are two drastically different things.

Outside of Atlanta an old, infirm lady is on her deathbed. She asks her servants to send out four letters in the hopes they recieve them before her death but shortly after she passes. The letters find their way into the hands of her Great Grandchildren, people she had never known and who never knew her, beckoning them to the estate. Soon enough three of the relatives arrive, followed shortly after by the fourth, a white man.

What unfolds is a slice of southern gothic with a healthy dose of voodoo. One by one the four start to fall under mysterious circumstances, though it’s not all that mysterious to us as we can see what’s going, but I digress. There’s not a lot here in the way of scares but there is some effectively creepy imagery although, and get ready for a great show of whiteness here, the voodoo scenes reminded me of Live And Let Die in their execution. There is a bit of good news however; the poster almost lives up to the movie. Bizarrely enough there is a giant skull carved into the mountain atop which the house sits, which is just begging for trouble if you ask me.

Where the movie falls down for me, and spoilers here if you care, is regarding Dr Cunningham. Cunningham is the white man of the group (Something which is never explained and doesn’t much matter) and is successful, wealthy and an anthropologist. When the movie ends with a voodoo ritual it’s him that overpowers it while Lorena, the only other survivor and a black woman looks on. It’s Cunningham, not Loretta who masters Voodoo and turns the table on their tormentors. It’s Cunningham who stays at the house at the end while Loretta leaves. I’m not sure what argument the movie is making by having Loretta seemingly so reject her own ancestry while a white man takes over, but it’s making it.

It’s a strange choice to have the movie’s remaining black character leave and the white one stay to ‘study’ and it’s not one that entirely leaves me comfortable. But I’m not really smart enough to think it through either. See, that’s what you get with me: come for the slasher movie reviews and stay for the struggle with anything that’s out of my comfort zone.