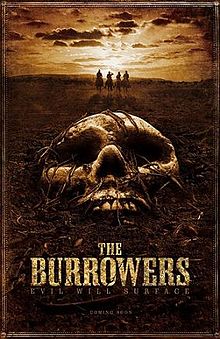 “If you so much as touch that gun without my say-so, I will holster it in your ass.”

You would think that more horror movies would be western themed. Both genres kind of lean well into one another, but it happens less than it should. On one end of the spectrum you have the excellent Bone Tomahawk from last year. The other end you have Tremors 4: The Legend Begins (Be weary of any horror flick that has a subtitle). So where does The Burrowers line up?

Thankfully this fits more towards the Bone Tomahawk side of things, despite the fact that it probably has more in common with that bad Tremors sequel with a little of Night Of The Living Dead thrown in there for good measure.

In the Dakota Territories a family is attacked. We don’t see by what. The next day a suitor for one of the daughters comes across their bodies. But his wife to be is gone and so a hunting party sets off on her trail to find the Indians that took her. With this being the turn of the century of course they blamed the Indians for everything. Still, such were the times. They briefly get aligned with a party led by one of those Civil war era villains you always tend to get in westerns. I don’t know where the trend started but they always look the same. They have these handlebar moustaches and super pale skin that’s all clammy as though they’ve stepped out of the shower. Anyway it doesn’t help that that character is played by actor Doug Hutchinson. Fans of The X-Files will remember him as Tooms, the guy who could fit into really tight spaces. Fans of the E! Channel will remember him as that really old guy who married that ’16’ year old girl.

Anyway for most of this slow burn this merry band of character actors (including the always welcome Clancy Brown) track down the missing. Along the way we learn something about the harshness of the west, particularly for minorities, and get small glimpses into what the titular creatures actually are.

Until the third act that’s kind of all there is to it. I don’t even mean that as a criticism. There’s just not too much to talk about. It’s all very watchable though and one thing I did like is that this isn’t the perfect blue sky and grand expanse of the American west. It’s dark clouds and long grass. I’m sure it was unintentional and probably down to budget reasons (Would anyone really choose to shoot on so many overcast days?) but it ultimately doesn’t matter because it adds to the increasingly oppressive feel of the movie.

There is a pretty clear metaphorical lean with the monsters, being as they are creatures who first showed up and hunted all the buffalo before then feasting on the Native Americans. Even so, I’m not entirely sure what it has to say beyond the fact what white people are bad. And of course we are. We love fucking a good thing up and throwing our weight around. As if to prove this point the movie does end on a grim, but realistic, note. It kind of goes at odds with the design of the creatures which is a little goofy though, despite you never really getting a great look at them. An unfortunate case of CGI doesn’t help either.

All in all though, The Burrowers is a solid, well crafted and grim time at the movies. And perhaps more a mid-week ‘all is hopeless’ sort of experience rather than something for a Saturday Night.