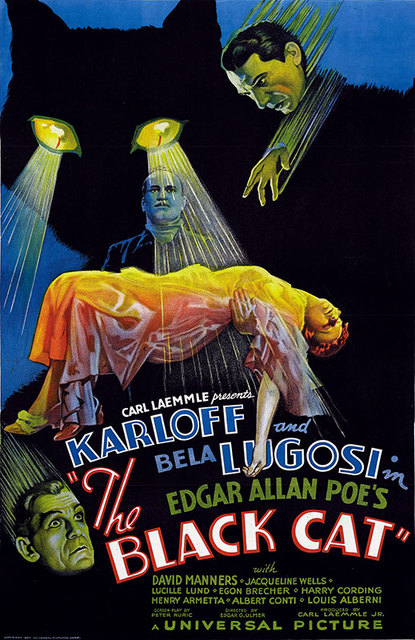 “Strange about the cat. Joan seemed so curiously affected when you killed it.”

First, a word about phrasing. I don’t know why it struck me so, but I was amused by the line “Suggested by the immortal Edgar Allen Poe classic”. It’s an odd bit of reverence for an author and their work. Though of course it could just all be marketing talk, the way that the advert on TV promises that Daniel O’Donnell is back with his “stunning new album.” Even if you hadn’t read the Edgar Allen Poe story in question, you know that there’s only going to be one or two elements they’ll take from it. Spoiler: There’s exactly one.

When these movies are done right (Specifically the period from 1930-1950) then they’re never less than enjoyable, even with certain affectations that, if you were to try and do them today, would likely illicit laughter. You see it usually in the performances. For example there’s a moment here when two characters are making small talk and realise they’re going to more or less the same place. Except one lets us know that there’s a problem when he stops, pauses for an impressively long time, looks out of the window and then speaks. These are moments that are specifically for the audience rather than the other characters, which is why it never goes commented upon, but as movie acting was relatively new (Particularly with the advent of sound), the over-exaggeration of theatre and silent work still lingers.

What The Black Cat has more than anything is atmosphere. This is often the case with black and white photography and thinking about it now I’m surprised more movies don’t try and shoot in black and white. The Blair Witch Project was in part, but that’s more for budgetary reasons than anything else. Movies are still shot without colour for one reason or another, so it would be good to see someone return to that to make a straight ahead horror movie.

As for this one it’s a strange beast. It stars horror legends Boris Karloff and Bela Lugosi, though old Boris is actually just credited as Karloff. I’m not sure why but perhaps it was an early attempt at when marketing just mentions someone really famous by their surname. Anyway, there’s a honeymooning couple on the Orient Express who bump into Lugosi and they learn they’re more or less going to the same place. Lugosi, being the gentleman that he is, offers them a ride which they graciously accept. On the way the bus they’re riding in crashes, and they make their way to Lugosi’s destination, which turns out to be the rather modern home of Karloff.

As we learn, Karloff and Lugosi have unfinished business, and both of them react…strangely to the new bride that has tagged along.

First of all as I noted up top it has next to nothing to do with Poe’s story. In this one Lugosi has a crippling phobia of cats. And that’s it. Though he does casually murder one (Kind of, it comes back later), which is probably funnier than it should be, and I say this as a cat lover. I thought it was going to be one of those things that comes back in the third act but it never does. The dude just doesn’t like cats.

The movie is actually about how Karloff has a predilection for marrying a lot of women (Wonder what happens to them?) and casually reading books about satanism in bed. It’s never actually explained why he’s so into Lucifer, he just is. And weirdly enough people don’t seem to be too traumatised by this fact. It’s like learning someone you knew is a Jehova’s Witness. It’s all very casual.

Lugosi is kind of a mad doctor in this (At least that’s how he’s described in the promo material) though his madness is forgiven seeing as Karloff sold him and many others out during WWI and Lugosi spent the better part of fifteen years in prison. I thought it was going to be revealed that he was the product of some kind of psychological torture and that’s why he’s afraid of cats, but no. I will reiterate again that he is so scared of cats that he can’t help but murder one as it comes in the room, to the surprise of no one.

I jest, but this is a legitimately good movie and with an excellent soundtrack of classical music cues. And running at a scant one hour, you can make time for two old horror legends on a dark evening couldn’t you?