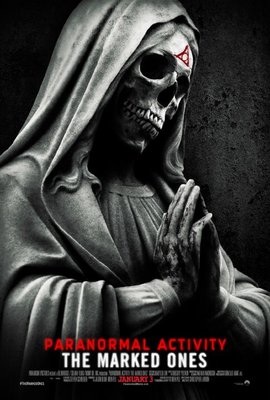 “Man, if she could travel through time, why the hell is she staying in this shitty-ass apartment? I’d timeportal my ass to the Bahamas.”

Sometimes when I do these I know what I’m going to watch in advance while other times it’s a “let’s see what’s on Netflix” sort of deal. There’s no surprises for guessing which this is. Also, the horror category on Netflix is largely dire which doesn’t help things (The Amazon one is even worse). But, that’s not to say this is a bad movie because it’s not. It’s actually very enjoyable up to a point. Which is what ultimately makes it a bit of a letdown.

I think that Paranormal Activity is a great movie. Not only does it work as a straight horror, but the subtext of domestic trouble manifesting itself in new increasing ways until it climaxes in murder works really well (That’s if you get to see the unaltered original version. The ‘official’ release tacks on a different ending that sort of ruins it). I’ve talked about this before though. All I’ll say is that things would’ve been different if Micah had not been such a dismissive asshole and listened to Katie. Men, there’s a lesson there.

Ultimately though they ended up becoming almost as convoluted as the Saw series, which probably needs a series of YouTube videos and a flow chart to explain. Though I will give credit to writers of that series for managing to contort themselves out of corners every time.

This one starts out promising enough. We witness the end of a high school graduation as friends Jesse and Hector watch a third, Oscar, giving their speech. When it starts off talking about how great your future is you know everyone is going to be fucked. Anyway, at a party in the apartment complex Jesse mentions the neighbour who lives below him and how she makes ‘weird’ noises sometimes. Nothing is thought of it until they see their friend Oscar angrily storming out of the woman’s apartment. Things then get extra crazy when the lady is murdered, seemingly by Oscar, and then weird things start to happen.

Jesse wakes up with a mark on him, and it’s the same ‘bite’ we see that Katie has way back in Paranormal Activity. At the start though its all fun and games. A gang of bullies get more than they bargained for when Jesse sends them flying through the air with one punch. A game of Simon Says seems to act like a ouija board when it’s spoken to, and Jesse learns that if he falls backwards then something will stop him from hitting the ground.

Meanwhile they investigate the murder scene of Jesse’s neighbour and they find a treasure trove of things the police should’ve taken. Seriously, this is the most poorly managed crime scene ever. There’s an easily visible basement that contains pictures of Jesse when he was a youngster. There’s a box of hundreds of videotapes all with different kids names on them. There’s a fridge that’s been padlocked up. The police seem so inept that I’m surprised they even managed to find the body.

Anyway as it turns out Oscar has been hiding in that basement and tells Jesse that they’ve both been possessed and it will force him to kill someone he loves and the only way to be free is to kill yourself. Oscar, man of his word, does just that. From there we get creepy shenanigans, a few cameos from other characters in the franchise and a bad third act.

It’s a shame that the thing that brings all of this down the most is that it has to tie in to this ‘mythology’ that they’ve cooked up across these movies. There’s a lot to like about this: the cast aren’t your standard. They’re latino kids who live in a basic working class area. They’re not the white, middle class family that has thus far been in almost every other horror movie to come out of America in the last however many years. It’s good to get a different perspective and the leads here are genuinely likeable. An early scene where they’re spying on their neighbour is particularly funny, and goes to show what a difference it makes when you let your characters be characters.

Ostensibly billed as a ‘spin off’ to the original series of movies, ultimately it proves to pretty much be a straight sequel, or technically, sidequel. Sadly, by the time the movie solidly ties in to everything that came before I stopped caring. I didn’t want to of course, I just don’t care about this world they’ve set up. Easter eggs and references are nice and fun to have, and I don’t mind hints and links that this takes place in the same ‘universe’, but when we revisit a scene from the original movie thanks to some time travel (Yes) then I’m tuning out.

It seems that for now they’ve stopped with this series, and I can’t say I miss it really given how repetitive they are (There’s a demon who wants the kids, adults get killed, kids get taken away, rinse and repeat). Even the unofficial sequel Paranormal Activity 2: Tokyo Night (No I didn’t misspell it, there’s no ‘s’ on the end) is better than most of the official ones. Still, if they had made more entries like this then another Paranormal Activity might be something to look forward to, rather than catch months later on your streaming service of choice.