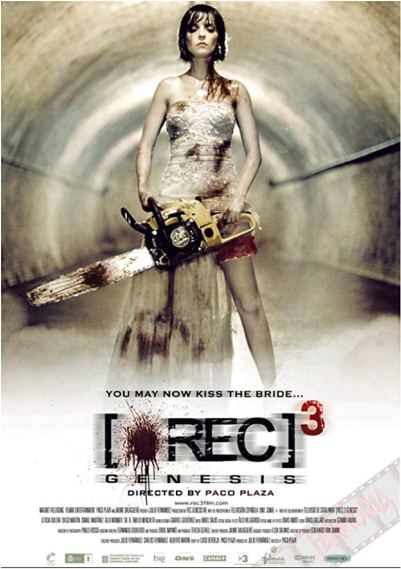 I was a pretty big fan of both [Rec] and [Rec] 2 when I first saw them (and I think covered in previous years). I even enjoyed the American remake of the first, called Quarantine when I saw it, even though it’s almost identical with a couple of neat differences thrown in. They were strong entries in the found-footage genre so when I saw the trailer for this I have to admit I kind of checked out. But was I right to?

We’re out of the apartment building that played host to the first two movies and this time miles away, and before the events of the first, at the wedding of Clara and Koldo. At the start it’s not all that much different from the original movie in that we get differing perspectives: one a wedding guest who’s been tasked with filming on his camcoder (That he boasts has ‘megapixels’), another is the official videographer who takes his work very seriously and that of a young girl. In a meta touch, the videographer has a steadicam and a fancy camera, bemoaning the run-and-gun frantic style of the first two films.

Then when the chaos begins, we lose our perspectives (And twenty minutes in get a title card) signified by someone smashing up a camera. I’ve not seen a rejection of the medium like that since David Lynch opened up Fire Walk With Me with someone smashing up a TV set. It’s probably also not quite the grandiose statement that was intended given that minutes later we get a nod to the original movies when a group has to work through crawlspace illuminated by night vision. Having said that, I’m not sure it’s quite so much the directors (In this case one of the directors of the first two movies, the other handling duties on the fourth part) belitting the thing they popularised so much as it is just wanting to break through the confines they created with some humour.

It’s also surprisingly funny. There’s a children’s entertainer at the wedding party dressed as a bootleg Spongebob character called ‘John Sponge’ because of copyright issues and one short-lived character just gets the name ‘Royalties’ because he’s not a guest but someone who has to sit in on weddings making a note of the songs played so they can be paid (I assume this is a Spanish thing). One of the best moments for that matter comes when a character sees the visage of St George and so spends a portion of the movie dressed as a Knight.

This might all be a bit much for some people, but I dug the kind of goofy tone. Indeed, a look at some of the reviews reveals that it wasn’t so well-recived at the time. I kind of understand because it’s such a change from what came before, even though it still shares the same DNA.

I guess what sets these movies apart from anything else of its nature is the relgious nature of the virus. I think it’s barely mentioned in the first one but with the second and with this it’s fully-fleged. It kind of gives it an interesting slant beyond just ‘a virus got out’ or whatever is popular these days. They’re not quite zombies but not demons either, though they respond to religious iconography. Also, it’s nice this time to have a throughline with Clara and Koldo fighting to get to eachother, something which reaches a climax when the bride has to wield a chainsaw. I liked this crazy couple and the earnestness of how their love story is treated. All too often horror makes being cynical easy when it doesn’t need to be, so it’s always gratifying when someone goes the other way.

If there’s one, nitpicky thing I could say it’s that the title doesn’t really make all that much sense. If you call the third part in your series ‘Genesis’ then people are either going to expect the origins of your story of Phil Collins. This isn’t particularly spoilerish but instead we can see that it’s in parallel with the first movie (Thanks to one of the guests at the wedding noting that he was bitten by a dog that came back to life, and a news report on the TV that shows the building from the first part). I dunno, I guess [Rec] 4: Wedding Day Blues doesn’t have the same ring to it.

Anyway I’ve rambled on enough but I’m going to finish up the series with the fourth and final part tomorrow. Here’s hoping I enjoy it as much.