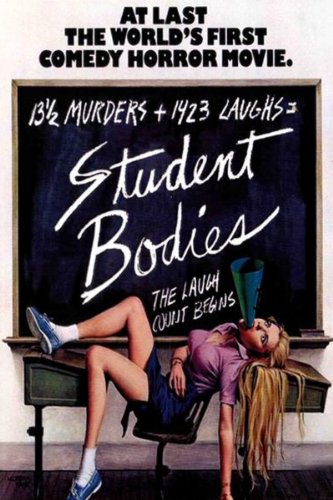 So first a lesson in trusting opinions. This appeared on a list I read about ‘Underrated Slashers’ and it promised scares and laughs wbile noting the ‘satire’ to be had from this early offering. So naturally I watched it and dear lord that was a long 96 minutes. So the lesson is: don’t listen to anyone, ever.

Christ, this movie. So it’s not a satire it’s just a bad comedy, which is usually the go-to defence for someone making a bad comedy. We open on Friday The 13th, which we’re told is also Jamie Lee Curtis’ birthday, so already you know the level of gags you’re going to get. A babysitter calls over her boyfriend but also notes that she has a feeling this will be the last time she gets to babysit…hohoho.

In the movie’s arguably most novel twist on the formula, the killer uses fairly mundane objects to kill with which in this case was a paperclip (or many of them, as it turns out). Then her partner gets wrapped up in a bin bag and that’s him does for (That all the men die by being thrust into a black bag is one of the movie’s goofier elements and not in a fun way). I will admit this scene probably got the biggest laugh from me, only because the boyfriend, not noticing his date is dead says “Julie, you’re not responding to my maleness!” Eh, I said the laughs were thin.

It also forgets to be scary, and never strays even close to being tense. If you’re going to satirise something you have to be good at the thing you’re satirising, otherwise it’s not really satire. Say that fast. Instead the movie chooses to just be goofy at every turn. Yeah I know I’ve said that already but I can’t think of a word that sums up the attempts at comedy better than that. Banal, maybe.

It doesn’t even have anything to satirise. The killer is driven to do what he does by couples having sex, but I have to think that by 1981 even that observation had to be old-hat and beyond that it doesn’t have anything else to say. Not that I expected anything particularly insightful from a movie that keeps a kill-count up on the screen, but something would’ve been nice.

The story goes that Michael Ritche (Director of Fletch and I love me some Fletch) had his name taken off the credits because there was a strike at the time and he was a union man, so full credit was given to screenwriter Mickey Rose. Very admirable of Ritchie until you learn that Rose was also a union man, so it’s more likely that Ritchie – wanting nothing to do with this shit – threw the guy under the bus.

Credit though goes to Kristen Riter as the Toby, the lead girl, for holding what there is together. She reminds me of Anna Faris in Scary Movie in that she’s arguably better than the movie around her deserves. It was her only acting gig as well, her other job being a backing dancer in a music video. I don’t know if she just couldn’t find work or the experience doing this put her on a different path instead. Either way, it’s a shame but I’m sure she ended up doing something she enjoyed a lot more and with a lot less bad comedy in it. Sorry, satire.

By the time the end rolls around we’ve piled twist upon twist into the third act and it doesn’t matter because the movie doesn’t give a shit. Here’s a spoiler, it’s the principal and his assistant even though they’re both in the same room when the killer calls. Ah twist again though because Toby was actually having a feverdream and we get a Wizard of Oz ending. But that also doesn’t matter because her boyfriend was actually the killer the whole time and frankly this flick can go do one.