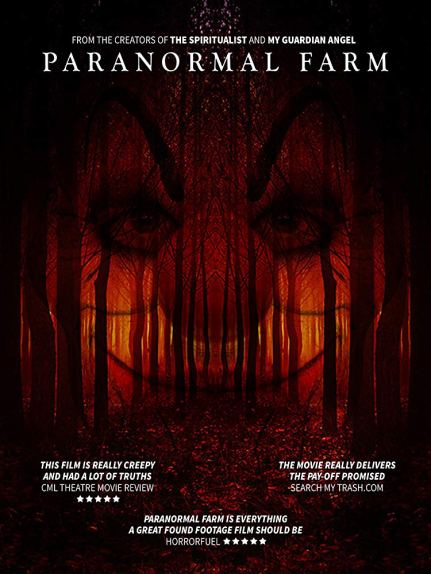 “Orbs. I thought I was going to see orbs and now I got bloody Freddy Kruger to deal with.”

Look on Amazon and type in either ‘Paranormal’ or ‘Haunted’ and you will get a plethora of garbage looking movies to choose from.  You want haunted streets, haunted lanes, haunted hospitals, haunted cul-de-sacs, haunted Ford Fiestas well you got it. They’re all the same low-budget, cheaply made schlock but they can’t all be bad can they? Even something called Paranormal Farm.

Carl is a paranormal investigator who has been called by the French family to investigate spookydoings at their farm. Within seconds of appearing at their house he asks them if they think it’s related to the fact their daughter went missing, so I’m not thinking that people skills are actually his strongest suit.

Anyway, Lucy and Darren own and run the farm with their not at all creepy mannequins set up around the place. The idea is that Carl will stay the night and observe the goings on (He admits this is only his second investigation). Perhaps he will give the French’s some closure. However for Carl, nothing is as it seems…

Ok so what is there to say about this one? First of all there’s that title which is already a pretty big barrier to entry. Who is going to take a movie called Paranormal Farm seriously? Well thankfully Carl does. And so do his cast.

It’s hard to talk about without talking about Lucy and Darren themselves. They’re clearly not actors and yet…they are. They might not have training, or have been in front of a camera before, but they are given the difficult task of having to act the way any professional actor would. Sure you could say that when Lucy has to ‘act’ drunk she is just in fact drunk and you’d probably be right, but acting still takes more than being yourself (Witness 50 Cent in Get Rich Or Die Trying). Even when having to deliver some clunky backstory they deliver it in their own amiable, believable way.

Their performances give this movie an uncanny effect because you start to question what you’re watching. I’ve seen enough ghost hunting shows to buy the early going, though that falls apart a little when things start to go off the rails for poor Carl. Once we see off Lucy and Darren we’re treated to scenes of Carl being scared by things that go bump in the night. However I do appreciate that Carl is essentially a giant pussy through all of this and is scared at his own shadow (And by a pair of doggers he runs into). Sadly though the scares are largely the same thing being that Carl looks around, sees someone in a clown mask and runs off screaming.

So I don’t know what to tell you. I certainly enjoyed it more than something like Girl’s Nite Out even if I couldn’t say it was better, if that makes any sense. It’s very much amateur hour but it’s also entirely charming to see something filmed on a phone that just goes for it. It might not be successful in what it’s trying to do (I frankly don’t think director/actor Carl Medland is good enough to carry the whole thing) but at the end of the day it almost doesn’t matter.