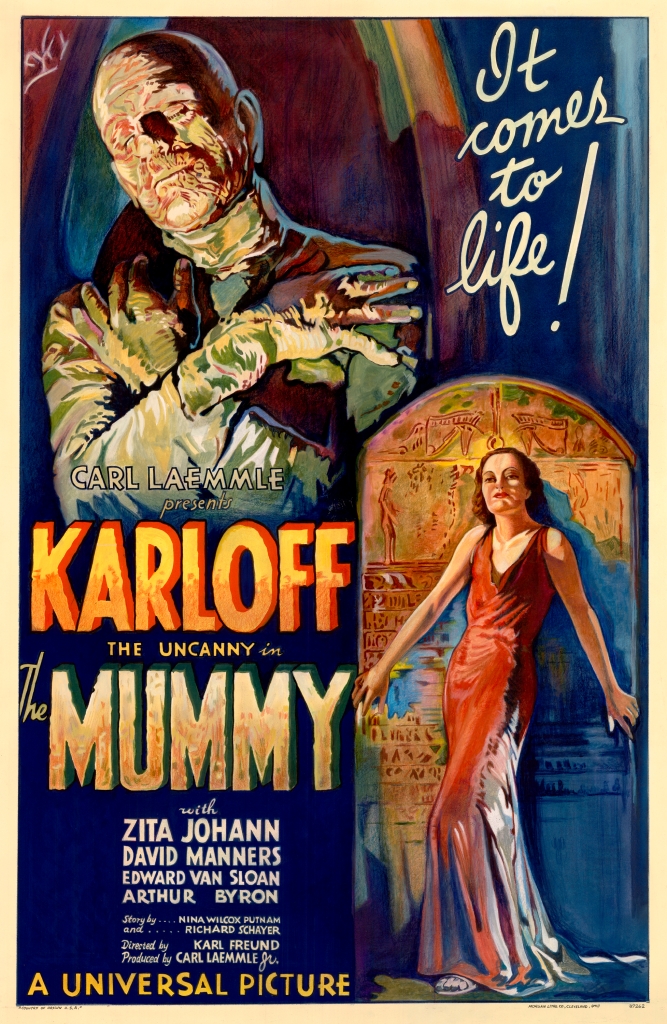 “Maybe he got too gay with the vestal virgins in the temple.”

After yesterday’s spooky corridors and cobwebs style I was in the mood for something that might fill that hole so I chose this one and well, this might be short. I’m a big fan of the Universal Monster Movies. I have no idea where it started really, beyond being family friendly enough when I was a kid that my folks knew that I could watch one without being scared. Happily, this has continued into adulthood. So that’s nice.

The Mummy is the one I’ve always been least familiar with. I believe in one of the previous years I did indeed take a look at one of the sequels, which didn’t really have anything to do with this one (Even though they steal footage from it, they change the names). It does however have a great poster, as you can see above.

I have seen this before, and some years ago, so I never before realised how similar it was to Dracula which came out the previous year. You know there’s that joke how the movies Ray and Walk The Line are essentially exactly the same? That’s kind of the deal here. Except two cast members pretty much play the same roles as they did in that earlier film (Actors David Manners and Edward Van Sloane played John Harker and Van Helsing respectively in Dracula and play ostensibly the same roles here). In that earlier movie Van Helsing gives Harker a crucifix to protect him, here its an Egyptian totem. And in both movies the villain believes the female lead is the reincarnation of their lost love. I can’t remember how that particular plot point plays out in Dracula but here he’s actually right. In my research (Yes I do some) it looks as though a reincarnation subplot was largely cut out, though it does get mentioned in part here.

All in all though the movie is kind of…inert? It’s easy to see why it’s probably one of the least mentioned Universal horrors. I would suspect that it’s mostly off the back of Boris Karloff, who is legitimately creepy in the role of Imhotep (Making 1999’s The Mummy an actual remake of this particular movie). They get a lot of mileage out of his visage, and it helps that the make up they give him manages to make him look old and dusty, as though he couldn’t quite nail his human form. Largely though he just shows up at places, stares at people, mind controls them and then just looks into his seeing pool so he can watch what people are doing. The rest of the running time, scant as it is, is so that our other two leads can declare their love for one another, even though the movie establishes that they just met weeks before. As an aside, the hero telling the woman that he will “make you love me, you’ll see,” is just as creepy as if a villain did it. But I suppose it’s a sign of how times have changed. Seriously, try that with someone you’ve only known for weeks and see where it gets you.

Anyway, at least Dracula had the good sense to have a few scenes in a castle. We barely get anything that might resemble Egypt here given that most of it takes place in drab indoor sets. Give me more than one shot of a pyramid. Please.

Also another unfortunate sign of the times, a servant character is referred to repeatedly as ‘The Nubian’. At one point the word comes so thick and fast that I considered turning it off in case anyone walking past got the wrong impression. By the way he immediately goes into servitude for Imhotep, which isn’t troubling at all. Still, that was the belief at the time (Even though in reality Nubia and Egypt largely co-existed peacefully. There also wouldn’t have been much difference, racially, between the Nubians and the Egyptians) and it just pales now in these 2016 eyes. At least they didn’t have a white man blacking up like they did in all those Tarzan movies.

Something else that’s weird, and thankfully less racial, is that you never see the famous Mummy walk like you expect. Seriously, that image you’re probably getting in your head right now, doesn’t happen. You only see Karloff as the titular Mummy right at the start and when he does walk you just see a trail of bandages. I don’t know when our popular misconception about these Mummys and their walking started, but it wasn’t with this one. There was no strange walks either. The Bangles have a lot to answer for.