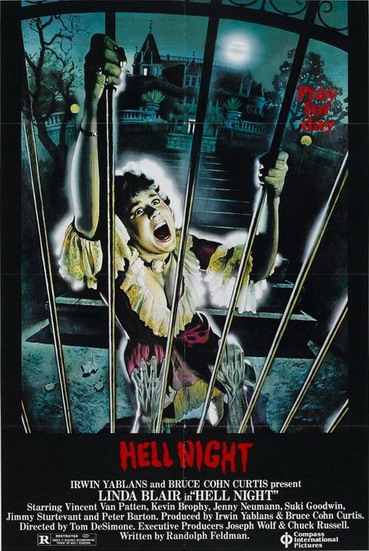 It must’ve been hard being Linda Blair. You star in one of the most memorable horror movies of all time and then you make movies like Chained Heat (A ‘women in prison’ movie and all that entails), and somewhere along the way you star in Hell Night.

Anyway, we open with a scream, literally, since that’s the opening frame of this movie and then we’re at a the type of party you never get in real life, complete with a motorcycle gan and women with drink trays given out drinks. It’s all very impressive.

So there’s a fraternity and we have four kids who want to join, including the young Miss Blair as well as an incredibly ‘slutty’ English girl, though why she’s trying to join a fraternity is never explained. As part of their initiation they have to spend the night in a haunted house. They get locked in, adapting to it pretty easily. So easily in fact that the English girl reveals that she’s brought quaaludes and Jack with her, which probably takes her from ‘party girl’ to ‘addict’. The signs were all clearly there but (Spoiler) she dies later on so no one gets to have an intervention.

A couple of the other guys from the fraternity have wired up the house with some practical jokes, and come back to make the night very difficult. This of course goes exactly to plan and everyone has a good lau-

Well alright they start getting killed. But who’s doing it? The fraternity leader (Do they get names?) tells a story about the people who used to own the house and its terrible history. While its met with a lot of eye rolling, it is of course true otherwise there wouldn’t be much of a movie. Then slowly but surely they all start to get offed in various ways (Personal favourite: the good old fashioned neck twisteroo), though personally it all happens a little too quick. The jokesters get killed almost immediately, leaving all too long before the main cast get threatened and even then there seems to be little urgency.

Blair’s character Marti (If you want to know who’ll make it to the end, look towards the girl with the gender neutral name) gets lumped together with rich, but sensitive Peter and they seem to be indulging in their own version of Before Sunrise while this goes on around them meaning that we have to keep cutting to these two characters ruminating about their lives, including the hilarious idea that Marti is actually a mechanic by day*.

Criticisms aside, what I will say for the movie is this: It is a hokey good time. It’s easy to watch on a Tuesday night and isn’t anything too taxing. Hell if not for one or two moments I’d say its even fine to show kids. It stops short of any nudity – just about – and there’s only one real use of swearing, making the whole thing almost…innocent. Strange observation to make about a movie called Hell Night I know. But given that 95% of the movie is set in a big house with spooky hallways and lit largely by candlelight, it seems almost old fashioned. Keep in mind this was at the height of 80s slasher sleaze, so this was a pretty impressive feat. If you ever wanted a live action Scooby-Doo with no dog and where only Velma makes it out alive then you could do worse than Hell Night.

Finally, an anecdote. Credit to my favourite podcast Uhh Yeah Dude for this story but in 2012 a man named Ray Fulke died. He was a loner and a recluse. The only person who knew him was his lawyer, whom he only ever saw one time about his will and never saw again. However when Fulke died he left $1 Million to actors Kevin Brophy and Peter Barton. Now, they’re not names that anyone knows. But Brophy starred in a short lived TV show called Lucan that ran for 13 episodes back in 1977, and Barton was a pretty successful soap opera actor (He starred in my own personal favourite, Sunset Beach). But that’s not it. Turns out the two actors are friends in real life, and not only that but they both starred in Hell Night. Brophy is, I believe, the first person to get killed in this movie and Barton is almost the last, so it’s not like they share the screen together, but all I can think is that Fulke must’ve known the two were friends, and in his own way wanted to be part of that club too. Quite why he decided to latch onto these two actors is anyone’s guess. But if anyone is a fan of this site I will happily accept anything I get left.

*This, amazingly, comes back at the climax. When Marti gets in a car that won’t start, in a usual horror movie cliche, she’s able to jump out and fix it.