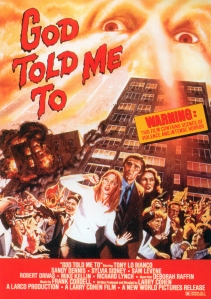 In the annals of cult America cinema I’m not sure that Larry Cohen gets his due. Usually mentioned as that guy made movie about ice-cream that kills you (The Stuff, which is fantastic), he had a great run of movies such as Q: The Winged Serpent, Hell Up In Harlem and It’s Alive.

If nothing else, he was a filmmaker who used great hooks and went from there (Indeed, the later Colin Farrell movie Phone Booth dusted off an old Cohen script). This one is no different: Random New Yorkers are committing spree killings and before they die they’re claiming “God told me to.”

Religious thrillers tend to follow a pretty similar path. It’s usually something about a cursed child or the devil coming back to earth but Cohen goes with something a lot weirder and also, potentially, aliens?

Not all of it makes total sense and really after a few scenes of killings the movie disposes of all that procedural stuff and becomes much more about an existential crises and a man’s search for God. It isn’t typical Sunday night fare, though it is fascinating in a way that I don’t fully understand yet.

The strange thing about Cohen is that outside of genre trappings he was a socially conscious filmmaker. Even something like The Stuff (Again, the killer Ice-cream one) is about the dangers of consumerism and that extends to here with the idea of the rich elite twisting God to their own ends. Or how he goes out of his way to show every facet of 1976 New York from boardrooms to trashy newspapers to dive bars in Harlem, everyone gets represented here. That’s both good and I’m sure for some viewers bad. It can be argued that you don’t need the Harlem subplot at all, but it all adds to Cohen’s stream-of-conscious filmmaking. It’s almost haphazard in a way, with seemingly important events just happening off screen and the audience being trusted to catch up with it (When the lead gets suspended from the force, I had to check that we hadn’t just skipped ahead).

The movie looks great too. Often shooting illegally on the streets of New York, Cohen captures it in its vibrancy without making it look phony. Amusingly enough there’s a few shots of people in the background noticing the camera and just sort of standing around and looking at it. However it really adds a note of authenticity to the opening, with random actors getting ‘shot’ and people around them reacting genuinely (It doesn’t always work – witness two people who just walk past while someone falls to the ground). Or a sequence later on in which a gunman opens fire on a St Patrick’s Day parade. Cohen and his crew grabbed what they could from a real parade and then shot some scenes of their own a few days later, editing the two together. Guerrilla filmmaking at its finest.

I’m not sure what else can be added. I could sum up everything that happens and I’m still not sure it would completely make sense. But that’s not a bad thing. It’s not because it’s poorly thought out or Cohen half-assed it, it’s because the movie is bursting with ideas and can’t always follow them. One thing is for certain; I might see better movies this month, but I’m not going to see one as singularly inventive as God Told Me To.