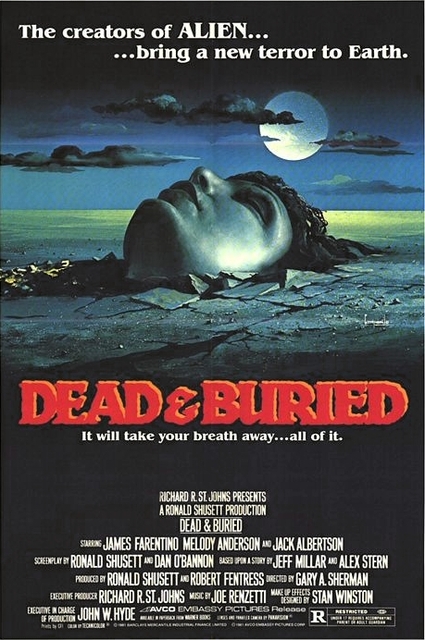 Oh my God, we’re back again…

Alright, well now we have that unpleasantness out of the way, why don’t we deal  with tonight’s movie:

In a small coastal town, the locals are attacking and murdering the tourists, except the tourists are then coming back and living in the town. And so the cycle goes.

First of all, I really like the opening scene to this: A photographer arrives on a chilly beach (Perhaps it’s supposed to be summer, but maybe they thought you wouldn’t notice). He’s taking scenic pictures when he’s approached by a woman. They have a little meet-cute and she asks if he’d take her picture. Naturally he obliges and while sexy saxophone music plays he snaps pictures of her. She playfully removes her top and asks if he wants her. While you’re thinking they’re about to get down to it a handful of other people appear, take his camera and beat him. Then they set fire to him. And take his picture.

As far as openings go it’s a pretty good one and fairly vicious too. If nothing else it’s certainly attention-grabbing. And just when the local sheriff starts to get a hunch about the burned man (He’s been moved to his car to make it look like a roadside accident), a fisherman ends up murdered too.

There’s a Lovecraftian element about all of this – without the unfortunate racism – about the residents of a town coming together to kill visitors, and the movie certainly doesn’t hide who’s doing what. In fact part of the joy is seeing certain citizens pop up again later on, in altogether more mundane roles (The woman who sets the man in the opening on fire shows up later on as a waitress pouring coffee). The only mystery is why they’re doing it and it’s thankfully not one that the movie stumbles with.

It’s a unique conceit to have a movie where essentially everyone is the killer but conceits aren’t enough, and none of it would work without a solid script to back it up. Thankfully that’s what we get here from Dan O’Bannon and Ronald Shushett. Both men are perhaps best known for writing Alien (Even though what came out was heavily re-worked by other writers) and O’Bannon did create the best zombie movie ever with Return Of The Living Dead. They fill their script with characters who have their quirks but not to an extreme. It’s almost something of a lost art. Too often movies, particularly horror ones, don’t know what to do with humour unless they’re making the questionable ‘horror-comedy’, in which case it’s usually neither that scary or that funny. It reminds me of Alligator which I reviewed a few years back, with its main character who is constantly worried about losing his hair.

This might have something to do with the fact that the movie was originally conceived as a dark comedy, though this final version of it ditches those moments in favour of horror leanings, including one unfortunate killing scene that isn’t up to the effects used throughout the rest of the movie (Mainly because it was added so late in production, and also because effects guru Stan Winston wasn’t on hand to do it himself). As it is, the movie works perfectly fine with generally good performances though one or two do perhaps get a little hysterical at the end.

Director Gary Sherman does a great job, particularly considering he wasn’t trying to direct a horror movie. He uses one subtle trick wherein he mutes the colour red as much as possible, so that when it does show up in the murder scenes it stands out a lot more. He shoots the town of Potter’s Bluff (There’s actually a joke in that name that might not be entirely clear until the movie is over) usually by evening/night, covering it entirely in fog, which only adds to the isolation and claustrophobia, rendering the town as some twisted Cabot Cove from Murder, She Wrote. The early seasons though, not the ones where she’s jetsetting to Ireland and trying to find out who’s murdering the accent.

Anyway, to say more about the plot would give away too much. It’s a shame too because Googling the movie gives away the climax right there on the front page, though it doesn’t sell the insanity of the last 10 or so minutes. One thing I appreciate is that they just go for it even if it doesn’t make a whole lot of sense. It’s a movie in which people take seriously the idea of the dead coming back to life without much of an argument. It’s just accepted. These days there’s a tendency to over-explain and tie things together with backstory so much that it becomes too convoluted and entirely less believable. By having the characters just accept, it goes a long way. This is fiction after all, not real life.

All in all though this has been a good start to October, lets hope tomorrow gives us more of the same.