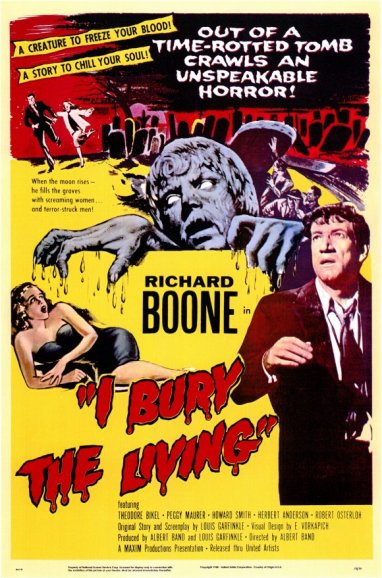 The 50s/60s was perhaps a curious time for horror cinema. On this side of the pond Hammer were getting started on their new age of horror, but in the US it had been laying dormant as a genre with the run of Universal horror as they were known being killed off once you get to Abbott and Costello Meet Frankenstein. In the aftermath of World War II and increasing paranoia about the atomic age, Sci-Fi took hold as the dominant genre with countless stories about great power run amok. It seems fitting then that we get a movie like this, undoubtedly fitting the same theme, albeit in a different way.

The landscape of horror by 1958 had already started the cycle anew, with the year previous seeing the release of both I Was A Teenage Werewolf and I Was A Teenage Frankenstein and Hammer releases Horror Of Dracula and then after that is a success The Revenge of Frankenstein. Nothing really stays dead and buried for long it seems.

Robert Kraft is a board member of a trust who, as is tradition, must serve as the director of a cemetary for a year. He’s assured that it will only be for two hours a week, but he’s still on the belligerent about it. You know how these board members can be. Adorning the wall of his ‘office’ is a map of the whole place, with each plot and its owner mapped out. As the kindly old assistant – clearly a young man in old man makeup – McKee tells him (In a dubious accent of Scottish descent), the white pins are for those who have reserved their plot and the black ones are for people who are living in them.

After meeting a young couple who, for various reasons, have picked out a plot together, Kraft puts a black pin on their space by accident and learns that the couple have died in an accident. Kraft feels terrible about it but life goes on. One day another black pin and another accidental death. Then Kraft seems to realise the extent of his curse.

This one actually took a different turn than I thought it would do. I had fully expected a sort of ‘mad with power’ story but instead got something smaller in scope that played out like an episode of The Twilight Zone. It’s certainly nothing like the salacious poster would suggest (Genuinely not sure where that woman comes into it) and there’s definitely no horrifying creature as it seems to suggest. Can you imagine if they put that poster out today? Dozens of people would be mad on Reddit. It’s more a tale of paranoia as Kraft feels genuine guilt and anguish as people try to convince him that he’s going mad. Usually that takes the form of making him put a pin in another plot and that person dying, so perhaps their methods aren’t the most helpful.

Visually it’s pretty great too. Colour was a lot more frequent in 1958 though by no means ubiquitos so this was still shot in black and white. It’s also staged almost like a play with at most, three locations being used. However Band (Father of legendary cheap director Charles Band, of such movies as The Gingerdead Man, Evil Bong and Gingerdead Man Vs Evil Bong) is savvy enough to know how to use the stripped locations to his advantage. One particular effect is the cemetary map gradually grows in size throughout the movie as Kraft gets increasingly caught under its influence. It’s also atmospheric as hell.

I, personally, didn’t love the ending with it coming firmly down on a conclusion…kind of. It tries to have it both ways and I don’t think it was entirely successful at doing so and kind of feels as though it’s some mandated studio thing. I’m probably wrong though and this was just how they ended things then. Either way it’s only a small blemish on an otherwise fun flick.