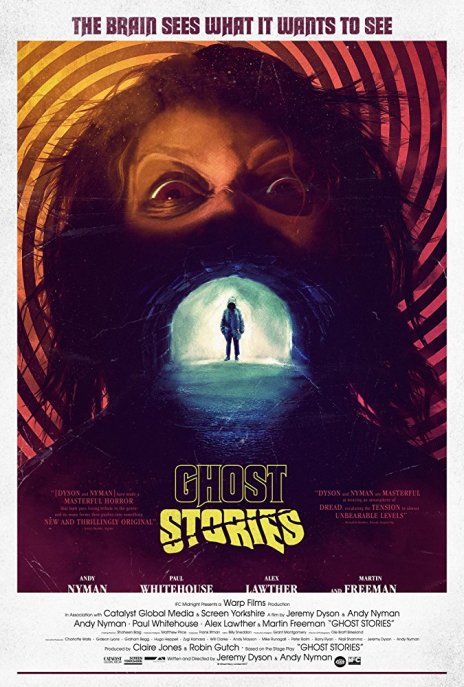 The brain sees what it wants to see, so goes a repeated refrain in Ghost Stories and in this case it’s what drives a paranormal debunker? What really gives someone the right to go into someone’s home and tell them that what they experienced and felt isn’t real? If I tell the debunker that there was a ghost in my room, who are they to tell me there wasn’t?

Portmanteau in horror seems to be a uniquely British thing. For whatever reason we used to love them or at least we used to make the best ones (I’m sure there’s a glut of crap out there as well). Most famous of these came from the short-lived studio Amicus, sort of a rival to Hammer with movies such as Asylum, Dr Terror’s House Of Horrors, The House That Dripped Blood and Tales From The Crypt, which was an adaptation of the comic book decades before the high-concept 90’s TV show.

Adapted from their own stage play – which I never got to see because for one thing I don’t live in London and for another even if I wanted to it was constantly sold out – by Jeremy Dyson and Andy Nyman, who also stars as the lead, Ghost Stories is the tale of Professor Jonathan Goodman, paranormal debunker. He recalls a predecessor of his, Charles Cameron, a 70s TV presenter who did the same thing before vanishing.

Then one day Goodman gets a tape, a recording from Cameron inviting him to his caravan. The old man is clearly on his way out and dismisses Goodman’s work as being shit. Everything they’ve been doing, he says, is a lie. To prove it he provides Goodman with 3 cases that he couldn’t solve. Once he’s investigated them Goodman should come back and accept that he’s been wrong.

So we’re off to the races. In the first we meet a nightwatchmen (Paul Whitehouse. Always good to see in a dramatic role) who relays the story of his last night on the job. In the second is a young paranoid man who tells what happened when he ran over something in the dark and in the third story we meet a financeer (Martin Freeman) who details what happened when his wife was due to give birth.

Each story is different enough to stand out, though I would argue the second one is the weakest and also not technically a ghost story if I was going to be a dick about it. Though I admit I did wish I was seeing the stage version at times as the scares started to become very similar. However one thing I loved was the dreary Britishness of the whole thing. Desolate caravan parks, grim workingmen’s clubs, all of it displaying the finest that the country has to offer.

I won’t talk too much about the plot and the wraparound story except to say that while I personally wasn’t crazy on it, I appreciate what it was attempting while not beating you over the head with the whole thing. They might have died out when Amicus did, but it’s nice to see something that keeps a British tradition alive.