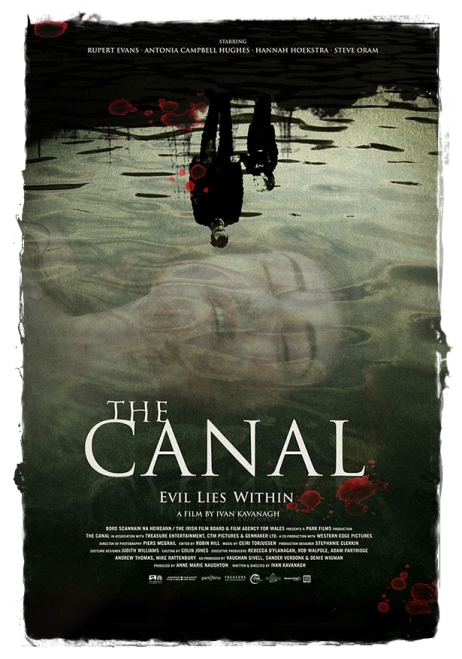 Well 27 nights in and we get our first British production. I’m not sure why but I’m never all that keen on British horror movies, or British movies in general for that matter (Did you know that it’s grim up north?). I understand how dumb that makes me sound so lets get on with this.

Grab a little of The Shining throw in some Sinister (Minus the awesome cardigan that Ethan Hawke is saddled with) and you have The Canal.

David, a film archivist, has moved into a new home with pregnant wife. Cut to five years later and we see their marriage is a little unhappy. Their lovemaking is perfunctory and to top it all off he finds out that his house and the canal that runs near to it was the sight of some gruesome murders. Personally, I hate it when that happens.

David views some crime scene footage from 1902. Yeah I know it’s a little much. The footage is black and white and silent of course, but it’s that fake black and white where someone has just put a photoshop filter on it. To get real nerdy, it’s not even in the right ratio. Crappy old footage like that isn’t going to be in widescreen. Ok, nerdiness over. The previous owner of the house murdered his cheating wife, killed the nanny and drowned himself and his children in the canal. Oh…do you see where this is going?

It’s less about the twists and turns and more about waiting for the inevitable with this one. To be fair to the movie I believe that is by design, though sometimes it can be hard to tell. We know full well where David’s journey is going to go and it’s just waiting to see how the movie gets us there.

All in all I liked it and Rupert Jones gave a strong central performance as David. It’s largely well-worn area, the father unravelling, so it can’t be easy to pull off. Also, with its setting and water imagery, the movie reminded me more of a slew of J-Horror flicks that came out in the wake of The Ring or Dark Water. There’s also some appropriately gruesome imagery, particularly a moment towards the end that honestly doesn’t make a whole lot of sense but just seemed like an idea that the director had and then didn’t want to get rid of.

Still, if you want some low-key chills and some solid acting you really couldn’t go wrong with this one. Maybe there is some life in British cinema after all.