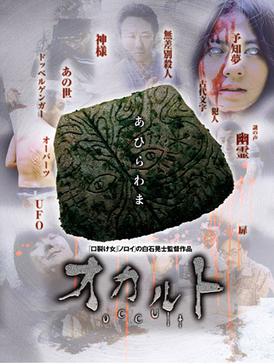 We’re taking our first foray to the east with Occult, from the director of Noroi which I had covered before and liked a lot. Turns out he had made a whole series of movies in a similar vein and to varying degrees of success.

A documentarian investigates the public murder of two women on a bridge and the wounding of a man. Before he jumped to his death, the killed carved a symbol into the man’s back and told him it was his turn now.

Recounting the attack, the man, Eno, tells of the many ‘miracles’ he’s witnessed. The film crew, ever curious, give him his own camera to record what he sees, all while they investigate the symbols that not only did the survivor have carved upon him, but also resembled a birthmark that the killer had.

This is a curious movie. It’s clearly very low-budget with some wonderfully lo-fi effects (I’m talking photoshop here) but it still works despite that. Shiraishi, pulling duty as an actor, writer, director, cinematographer and editor stages the whole thing as a faux-documentary rather than found footage and it works to his favour. The journalistic approach that he also took with Noroi is just as viable as pretending that someone left footage lying around and that someone edited it all together.

For most of the movie we just follow these characters around until eventually, Eno decides that what he was put on this earth to do, and the reason he keeps witnessing miracles is that he has to do something terrible, just as his attacker had done to him. Everyone takes this in their stride, though the idea of a journalist willing to follow a story right through to its gruesome end is arguably more potent in 2017 than it was in 2009.

Eventually, it all builds to a Lovecraftian climax that’s much better in theory than it is in execution, where the unbelievably cheap production really hampers something that could’ve been a lot more disturbing. If Shiraishi wanted to go back, George Lucas style, to alter the ending of his movie with a bigger budget then I certainly wouldn’t complain at all.