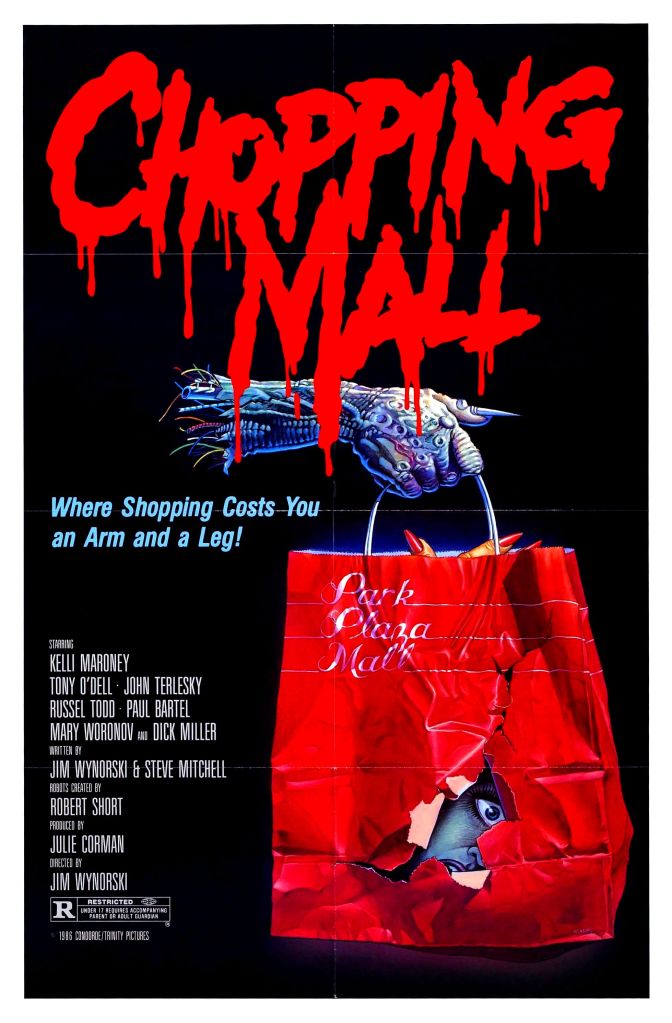 “I guess I’m just not used to getting chased around a mall at night by killer robots.”

Having recently watched way too much of Dan Bell’s Dead Mall series, I was in the mood for a little something that could’ve only been set in one of those esteemed establishments and so, not being able to think of any other horror movie that was set in a mall, I had to fall back to this one which was A) Most certainly a title before a script and B) Missing an exclamation point.

Chopping Mall! as it will be known could’ve only existed in the 80s. It has a party in an ill-advised location (a furniture shop), it has robots and it’s set in a place that is largely non-existent these days. Hilariously, the movie starts with a safety demonstration in which robots ‘neutralize’ a robber. I have a few problems with this opening: one is that it greatly overestimates the importance of malls and the other is that the robots look evil from the beginning. I know they’re supposed to be security, but these Buck Rogers looking guys are simply bad news. Also, no one is suitably amazed that robotics have advanced to such a level that we can rely on them patrolling our shopping centres. Finally, the demonstration ends with the waiting crowd being told that “definitely” nothing can go wrong so, you know, that’s where the movie ends.

Oh no, what actually happens is that there’s a lightning storm and the robots go nuts.

Sadly, the concept of killer robots in a mall isn’t quite the thrill ride you’d expect. Mainly because of budget and maybe because there’s only so much you can do with the idea of killer robots, or at least these killer robots. Sorry Dr Who fans but the Daleks were never particularly scary and that goes double for the ones here, who resemble half a Johhny Five from Short Circuit and one of those rejected Robocops you see in, well, Robocop.

Weirdly, one guy gets knocked out with a blow dart before getting his neck cut off-screen, presumably because they didn’t have the budget to film an actual neck cutting. Though we do have a sweet head explosion. Oh yeah, the robots have lasers, though it’s never addressed why they’re allowed to have lasers that can make heads explode. Seems like someone at the company fucked up there.

All in all Chopping Mall! (which was actually released under the far less interesting title of Killbots) is a schlocky and silly time that zips by pretty quickly. Plus you get to live in a time when malls were still a thing. Though just once, I wish someone tried using the stairs.