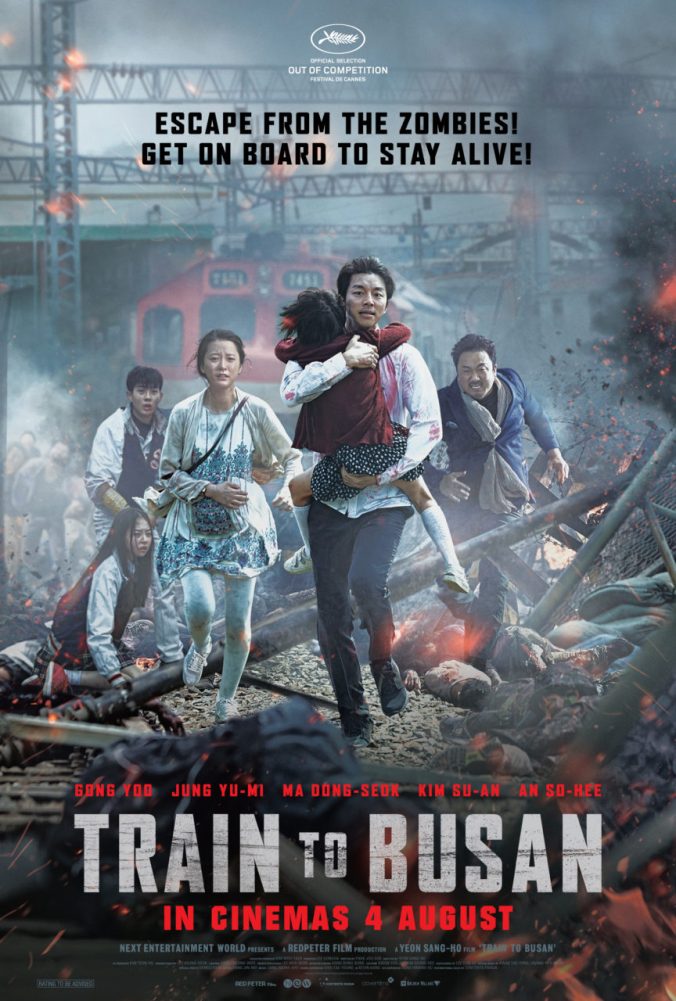 What more can be done with zombies? Decades of movies and now TV shows have pretty much shown us all there is. It says something that the biggest development in zombie-dom is that they can move fast (And even that isn’t all that new, in Night Of The Living Dead they move faster than usual, and in Return Of The Living Dead they can sprint and occasionally talk). But zombies have become a big deal in recent years, and so something new is needed.

Train To Busan isn’t that exactly, but it does enough to make things feel different. Set in Korea, we get to see the usual decay of civilisation only this time from a train that’s heading from Seoul to Busan. They almost get away with it too, if it wasn’t for the fact that at the last minute a bite victim gets on the train and from there…well you know how it goes if you’ve ever seen Flight Of The Living Dead.

I liked this one quite a bit, and at a time when everyone was flipping their shit over The Walking Dead as well. This finds ways to get very inventive with something that’s so limited and shows that yeah there’s a bit of life in the old genre left yet.

It’s mainly the small things they get right. The zombies here have a particular way of moving. After they get bitten it’s as though they jump-start back to life but not before contorting themselves, kind of like in The Last Exorcism. It’s a jarring little effect that makes for a neat little addition. Also, they seem to exclusively go for the neck, only in a rare case does someone get their arm bitten or something like that, but by and large it’s always neck bites and I have to assume that was intentional.

Another touch I liked was that if they can’t see you they immediately become docile, and more like the shuffling zombies we all know. When the lights go off (Such as when the train enters a tunnel) they can’t sense at all, and have to go by hearing. It’s a neat way to throw in some different setpieces and stops the movie from repeating itself too much. It’s probably that quality I liked the most actually. Given how quickly the attack happens (Almost as soon as the train leaves) I expected things to move a little slower than they did. Instead though there’s always a new spanner in the works. For instance while they bypass the next stop they get off the train shortly after only to find that there’s been an attack there as well. Or like when later on in the move where the track is blocked. It stops things from getting too stale and I like that they took the time to do it.

Like Snowpiercer there’s also a touch of class warfare there. The inhabitants of the carriages are a good mix of people from different backgrounds, with groups naturally seeming to separate themselves out by their standing (The addition of a homeless stowaway serves to make this point abundantly clear. At one point after declaring that “Everyone is dead,” he’s mocked by another character who tells a child that if she doesn’t study hard she’ll end up like him) and the movie REALLY loves to hammer home the theme of ‘Don’t be selfish’ a number of times. It’s a lesson our main character has to learn, but it’s also something that comes up a few other times as well. It is, of course, a worthy message. What’s frustrating is that the movie actually does it both ways. I was appreciative of the fact that everyone in our core group is actually helping one another and looking out for each other, but I don’t need them to tell me that’s a good thing.

I think the movie is probably about a good fifteen to twenty minutes too long. There’s certainly material that could’ve been excised. We learn at one point that the company our main character works for was in some way responsible for the outbreak that started this whole thing off, but it’s completely unnecessary, and it also actually goes nowhere. It’s kind of stated and then…that’s it. Also I don’t think we need quite so much of him being a deadbeat dad. Usually we get the cliche of the dad missing some important event in his child’s life or getting her a shitty present, but this time we get both. Again we get the point and in filmic terms it’s like writing the same sentence out twice.

It’s also relatively violence free. That’s not too much of an issue, but I would’ve maybe preferred a little more of the red stuff, if only so they could get a bit more inventive. There’s the feeling once or twice that they’re holding back on what they really wanted to do. It wasn’t until after I was done that I read it was made to be a sort of 12A rated flick, which explains a lot. I was reminded most of all of World War Z only this is much better. The zombies move in a similar way, and in a great moment two separate groups of them clash into one another causing this huge pileup. Yes it’s a cool visual, but also shows how single-minded they are.

Overall I dug this, with some caveats, but it’s definitely worth checking out. Maybe there is life in the old corpse yet.