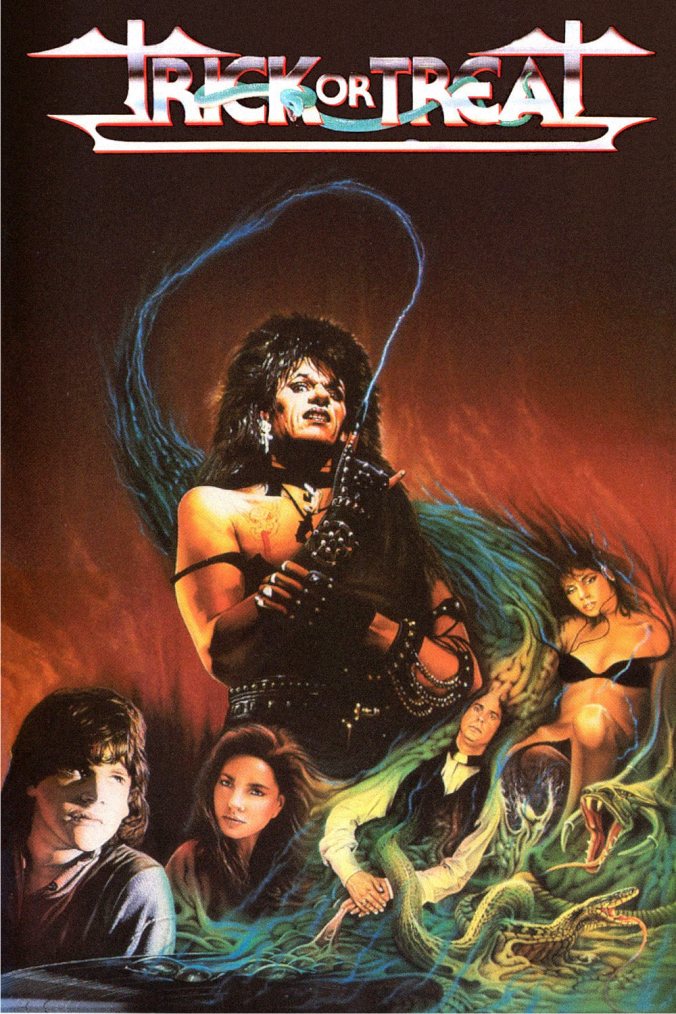 (If I could make this poster any bigger I would. It’s fucking glorious).

“You should be loyal to your heroes… they can turn on you.”

Is this technically a Christine ripoff just with metal music instead of a car? Yes. And do we open with yet another instance of satanism? Why yes we do.

The inexplicably named Ragman is the school metalhead (More on this in a bit), obsessed with metal star Sammi Curr. He writes fan letters to Curr as he lives the sort of life that any outcast kid does, getting bullied by a guy who looks like Queens Of The Stone Age frontman Josh Homme. Just as he posts his latest love letter off to Curr he learns that he died in a hotel fire.

All of this is too much to take for poor Ragman as he writhes around on his bed. Then he meets local DJ Nuke, played by walking venereal disease Gene Simmons, who hands him an acetate of Surr’s final album. It’s the only copy, somehow, and he lets Ragman have it. Falling asleep while listening to it one night, he realises there’s some backwards masking on there, and that the message seems to be directly addressing him.

So what does this helpful voice do? Help him get back at his bullies of course. Quite why Surr, who has managed to somehow make himself return from the dead, would then spend that time helping out some drippy kid rid himself of bullies is anyone’s guess. I’m generally confused about what exactly Surr wants anyway. Later on he makes an appearance at the school party, rocking out on stage and then blasting people away with the magical power of his rad solos.

On that note, I don’t know all that much, but I know that at the height of metal in the 80s that a high school would have more than one kid who was into it. The way everyone talks about him, you’d be forgiven for thinking that Ragman was the only one. Or maybe it’s his stupid fucking name. I’m not saying anyone deserves to be bullied at all, but come on Ragman, you’re not helping yourself.

Anyway, this is relatively goreless and if it wasn’t for the language there’s no reason that it’s not something the whole family could…while not enjoy, certainly watch. There is one scene in which Curr, who has constructed a magical tape? almost brings a woman to climax when she plays it, but you can shield any young eyes during that.

Even Curr’s big scene, where he’s rocking out to the metal sounds of the band Fastway is bloodless. People get zapped with the power of metal and they turn into dust. It’s all relatively benign (And like a very low rent Carrie), but it gets to a central problem with the movie which is that Ragman veers way to close to being the villain (Actually people do die and the movie brushes off that it’s basically his fault). So why, through the guidance of the the backwards voice of a man who through the practice of dark arts has brought himself back from the dead, the bullies almost get killed one time already, would you listen when the voice says here’s this totally magical tape I’ve just made and make sure you give it to that guy who’s bullying you. Nothing good will come of this Ragman. Nothing. It’s not a good thing when one of your antagonists is in the right.

For that matter, it’s hard to decide where the movie actually comes down on metal. This was released at a time when satanic panic was on the rise and when metal was hitting mainstream america. But here’s a film that kind of plays directly into those fears by saying everything you fear is totally real. Save your kids! Though as a little joke it does feature Ozzy Osborne as a reverend on TV, talking about how perverted all this music is, so who knows. It does however, end with this kicking song, the video for which I’ve thrown below. More music videos should feature the villains of their respective movies in them.

“This could kick you off into becoming an absolute pervert.”