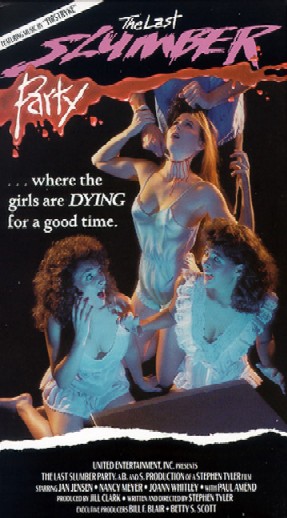 Directed By: Stephen Tyler (Not that one)

Ok yeah so this is probably one of the worst movies I’ve ever seen. It fills that hole like Manos: The Hands Of Fate or The Room where the ineptitude has to be seen to be believed. For my mind it’s probably even worse than The Room, which is an impressive feat if you know anything about that.

Man alive where do I begin? Well first off while you might think it’s the last slumber party because everyone gets killed off, I can assure you that really it’s because it’s so boring. The girls have a couple of drinks and then just go to bed. And then they decide to not go to bed and go back downstairs and watch a black and white TV. I always thought there was more to it than that. In the middle of all this there’s some sub-Porky’s shenanigans going on with horny teens. Then on top of that there’s a dose of Halloween in there as well. I say a dose, I mean scenes that are lifted outright.

Like that much better movie, the killer has escaped from a hospital. We’re not really treated to how. He just has. He wastes no time in cutting people’s throats with his scalpel. Hilariously you see the fake blood that haphazardly ejaculates from it too.

This movie has no time for things like competency. For example, one character casually walks up to the others to no reaction, but is told “Jesus, you scared me half to death!”. Also, the sound mix is terrible so while characters are talking you either get terrible synthesisers, bad pop music or godawful hair metal. The poster boasts that it features a song by ‘Firstryke’. Who are these plucky lads exactly?

This is the best picture of them.

Like all great bad movies it’s almost like a fever dream. Scenes end a little too early. The editing is atrocious. There are long stretches where things should happen but don’t. We get a shower scene but the whole time it’s awkwardly focused on the actresses’ head, rendering it kind of pointless. I don’t raise that because I’m demanding nudity by any means, but because it can’t even get the T&A right. So rather than just cut the scene, they go ahead with it anyway. Sometimes the quality of scenes visibly degrade as though for that shot they were using the ‘bad’ camera.

But even that can’t sum up the scene-to-scene badness of this. At almost every moment something inept is taking place.

There are some things. It has an awesome final girl for one. Chris is kind of sex-crazed and would usually be the first to die in this kind of movie, but not here. She doesn’t hesitate to bone down and, when she can’t get that, throws around gay slurs with nary a thought.

By the end, the movie devolves into some kind of insane, almost wordless avant-garde filmmaking. And it has no less than three endings. I’m not kidding about that. It’s as though they had a few ideas for an ending and decided fuck it, lets shoot them all and then vaguely try to string them together.

It’s only a spry 70 minutes long and it can be easily found on YouTube. I highly recommend it. Having thought about it and talked about it a little, I think I kind of loved it.